Category Archives: Where in the world am I?

Since December 3rd 2014, I have been based in Chennai, India, enjoying the opportunity to spend time visiting my in-laws, while doing some sightseeing and experiencing the country’s diverse culture. I have included a map below with a pin on Chennai.

I’m also using this time to focus on my linguistic skills. As well as having fun trying out the local language (Tamil), I’m also continuing to advance my Arabic through a combination of translation practice, vocabulary learning, and the production of original Arabic materials, including infographics and word maps.

You can view an example of my most recent work here. I look forward to sharing more very soon!

Posted in Where in the world am I?

Since January 10th 2013, I’ve had the incredible privilege of living and working in one of the most beautiful countries in the world – the Maldives! I work as an English Teacher and the Head of the English Department at Lale Youth International School, based in Hulhumalé. I live in Malé, the capital island, so I commute to and from work by ferry. You can see the island locations on the map below. The capital island is also a short speed boat trip away from the many luxurious resorts that the Maldives is most famous for. Being able to escape to dream-like tropical islands on the weekends has been a huge perk of living and working in the Maldives!

Posted in Maldives, Where in the world am I?

Since the 28th of August, 2012, I have been living and working in the city of Ha’il, Ha’il Province, Saudi Arabia. Working for the Saudi company, Al-Khaleej Training & Education, I teach English to students of the Preparatory Year at the University of Ha’il.

I’m currently living in Sakaka, where I’ve been based since September 9th, 2011, working as an English teacher at Al-Jouf University. My first four months here I stayed at the compound provided for the teachers by our company, Al-Khaleej Education & Training. It’s located about 25-30 minutes away by bus from the city centre and although comfortable, the compound’s isolation was not ideal, especially when wanting to practise my Arabic with locals. So I decided to move and since February 2012 I have been living in my own apartment downtown, close to the university campus and city centre. You can read more about moving into my new place here.

I’m set to move again soon, however, as our company’s contract with Al-Jouf University has expired and all employees are being transferred to other projects within Saudi Arabia. 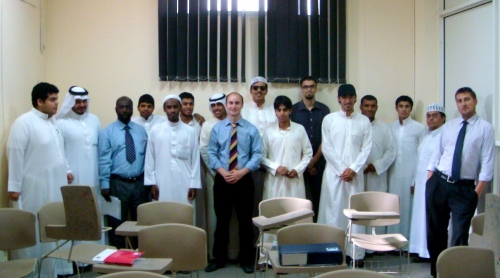 Here’s the update you’ve all been waiting for… I’ve finally arrived in Saudi Arabia! It’s been a very long day of traveling and needless to say I’m pretty exhausted. Although it’s already approaching 2:00am local time (midnight in London) and I’m shattered, I decided I’d stay up a bit longer and update my blog to let all of you know I have arrived safely. Even though I have only just arrived, I’ve already had some very interesting experiences, and I’m sure they will be the first of many more to come.

Starting in Cardiff, my journey took three flights in total, first to Amsterdam, then to Dammam (in Saudi Arabia), and finally to Riyadh. To and from Amsterdam I was on Royal Dutch Airlines and then Saudi Arabian Airlines to Riyadh. There was a very noticeable difference between the airlines. There was, of course, no alcohol on the Saudi Arabian Airlines flight. Moreover, however, I noticed the air hostess assisted in seating each passenger so as to segregate single men from the women. In the row of three adjacent to me, for example, a male passenger was asked to move from the window to the aisle in order to allow a woman to sit by the window, with her husband acting as a buffer between her and the male passenger.

The next remarkable thing was when the overhead TVs played the usual safety video and then – a prayer for the safety of the flight! Can you imagine something like that on an airline in America? The video explained that this particular prayer was said to have been used by Mohammed when embarking on a journey. The equivalent would be if, on United Airlines for instance, they presented the safety video and then… “And now a prayer to Jesus for a safe flight…” Pretty hard to imagine, but clearly over here this sort of thing is taken for granted.

I was pleased not to have encountered any issues getting through immigration. It was just a twenty-minute wait or so. Then, before stamping my passport and letting me on through, they scanned my fingerprints and also took a photo for their records.

I then picked up my luggage from the baggage claim. On Royal Dutch Airlines I was only allowed one check-in bag, weighing no more than 23kg (50.5 lb). I just barely made it under the limit, that is, after removing all of my books and carrying them in a separate plastic bag! There was no problem, however, in carrying these on the plane in addition to my laptop bag.

Next was the meet and greet and thankfully a member of staff from Al-Khaleej was waiting there for me as promised, holding up a sign with my name on it – just like in the movies. After a prompt “assalumu alaykum!” (peace be upon you) and an enthusiastic shaking of hands, he introduced himself; “Hello, I am Osama…”

He was of course very welcoming and I was not surprised at all to receive such warm hospitality, which Arabs are particularly known for, and which I have experienced many times across the Arab World. So far, coming back to the Arab World hasn’t been too much of a culture shock; rather, it feels like I’ve returned to my home away from home! I look forward to getting more settled in over the coming months. I still don’t know where I will be based more permanently, but will apparently find out on Monday, when I am meeting up with another member of staff from Al-Khaleej who is involved in the placement process.

In the meantime, I’ve been told that I will likely be based in Riyadh at least until Monday. With it being Eid (at the end of Ramadan), things are rather slow at the moment. On the plus side, it means I will have some time to chill out here at the hotel for a while and also get to know some of the other new arrivals who are coming in this week. Apparently there are already a few other teachers here in the hotel. I’ll have to look out for them tomorrow – I have a feeling they will be pretty easy to spot!

It’s a pretty decent hotel – with large rooms and much needed air-conditioning (albeit very loud). Yes – as expected, it’s very very hot over here! So much so, in fact, that at some restaurants where they have outdoor seating, there is piping overhead that sprays a mist of water over the guests to keep them (relatively) cool. After checking into the hotel, Osama took me to one such place, called “House of Shawerma”, where we picked up a couple chicken shawermas (wraps made with cuttings from the giant turning meats you see at kebab shops). I was very hungry – I just hope eating shawerma on an empty stomach doesn’t prove to be a bad choice! I also picked up some water and soft drinks for the fridge in my hotel room. As I write this, there is a 2 ¼ litre bottle of Mountain Dew by my bedside – am I in heaven?

I will keep you updated as things progress over the next week! 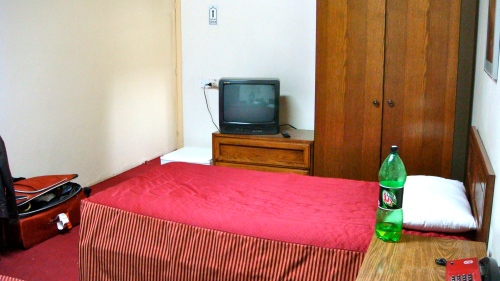 Posted in Saudi Arabia, Update, Where in the world am I?

I’m currently based in Cardiff, Wales!

My brother Gordon and his family have kindly let me stay at their place as I wait to move back to the Arab world.

I’m treating this time between jobs as an extended vacation and am enjoying the opportunity to spend time with my family based here in the UK.

It’s been especially great to be able to spend so much time with my little nieces here in Cardiff and to see them grow up so quickly! It’s also been a pleasure to see Gordon at work at St. David’s Lutheran Church and to get to know members of the congregation there. I’ve enjoyed getting involved in some of their church events, including their recent 50th anniversary celebration.

As well as babysitting and relaxing with the family, I’m also spending my time reading and doing some language work. In particular, I’ve been practising my Arabic, but have also begun reading up on Turkish and Urdu, both of which I am very interested in and plan to explore in more depth.

I also enjoy updating my new blog and preparing for my upcoming adventure in Saudi Arabia… click here to learn more!