This verb map (available at the official Nigel of Arabia Store) I created in order to demonstrate both the complexity and elegance of the Arabic verb. In this case, I have illustrated the verb ‘to do; to affect’ (فَعَلَ), which is a “Form I” verb (derived from the triliteral root ف-ع-ل).

I chose to illustrate this root in particular as it is the root that is most commonly used in Arabic grammar references and textbooks to present all of the different word forms possible in Arabic.

Although very detailed, this map is by no means exhaustive, as I have not included all of the various verb conjugations and words derived from Forms II-XIV. I have also not given the different forms of the active and passive participles.

To make the most of the map, I recommend you begin from the root, which is given in the large red box and is the heart of the verb map. From there the map provides a quick glimpse of Forms II-XIV of the root (next to the grey boxes), before proceeding to the main subject of the map – the Form I verb فَعَلَ (given in the blue box).

In order to conserve space I have omitted the terms ‘masculine’ and ‘feminine’. Instead, I have colour-coded words where relevant; blue for ‘masculine‘ and red for ‘feminine‘. The ordinal numbers refer to the person (e.g. 2nd = second person, “you”). For those unfamiliar with the “dual” – it is a form used in Arabic when addressing or referring to two people or things.

The grammatical terms I have chosen to use in my map are not the only ones used to describe those parts of the verbs. For example, the “imperfect” form of the verb in many contexts could be described as the “present” tense; the “perfect” is sometimes called the “aorist”; and the “verbal noun” is sometimes referred to as the “infinitive” or “gerund”. Therefore, I have included the corresponding Arabic terms to avoid possible confusion.

I hope you enjoy the map and also find it to be a useful resource. To get your own copy, visit the official Nigel of Arabia store!  – Thanks! 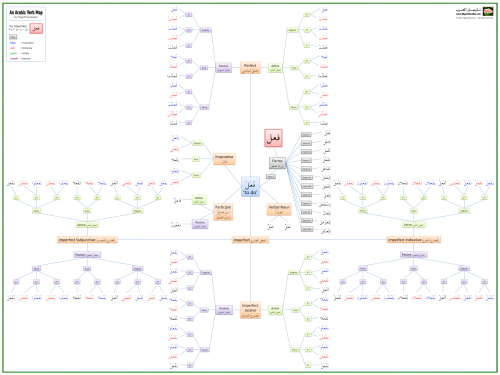 NOW AVAILABLE AS A HIGH-QUALITY POSTER!

…Whether for home, or posted on the classroom wall, this unique Arabic verb map poster will prove to be an invaluable resource, worthy of the incredible effort and time that has gone into its research and creation.

Click here to view the poster on sale in my official Zazzle store.

9 responses to “Map: What an Arabic Verb Looks Like!”